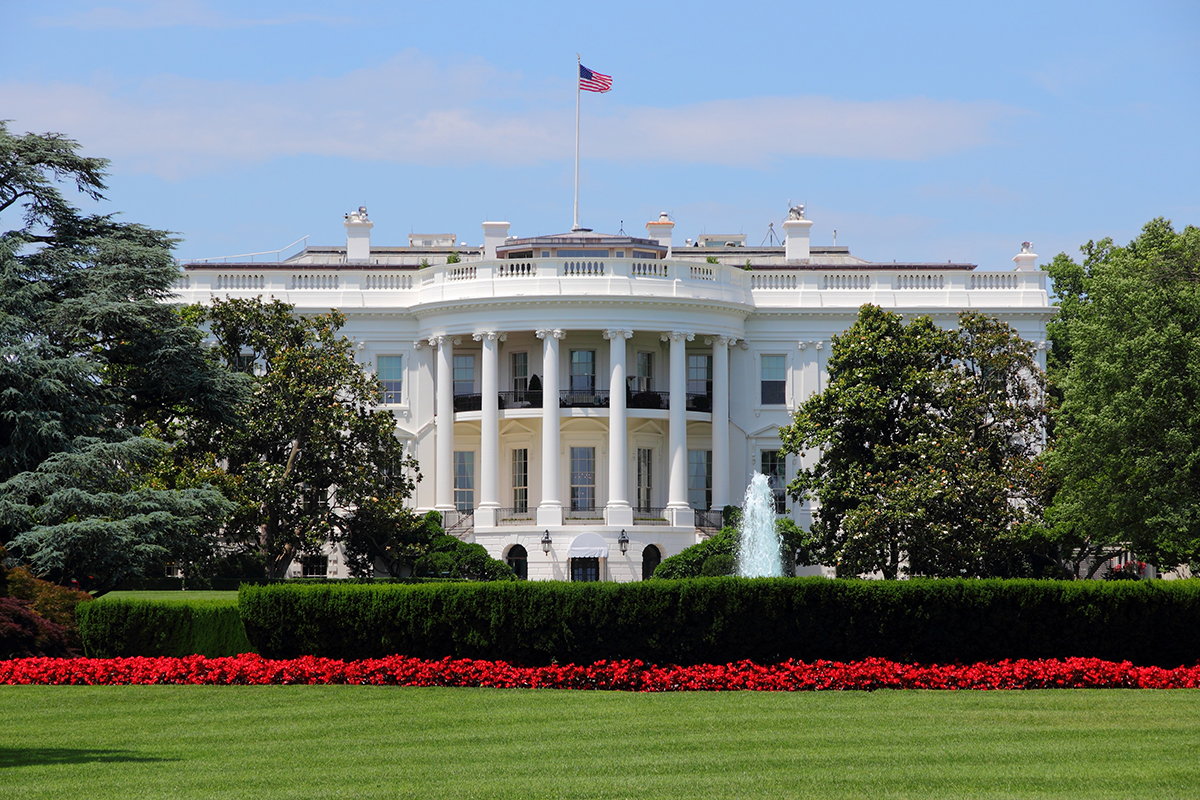 Presidential Elections: What Do They Mean for Markets?

It’s almost Election Day in the US once again. While the outcome may be uncertain, one thing we can count on is that plenty of opinions and predictions will be floated in the days surrounding the vote. In financial circles, this will inevitably include discussion of the potential impact on markets. But should elections influence long-term investment decisions?

We would caution investors against making changes to a long-term plan in a bid to profit or avoid losses from changes in the political winds. For context, it is helpful to think of markets as a powerful information-processing machine. The combined impact of millions of investors placing billions of dollars’ worth of trades each day results in market prices that incorporate the collective expectations of those investors. This makes consistently outguessing market prices very difficult.1

Furthermore, data for the stock market going back to 1926 shows that returns in months when presidential elections took place have not tended to be that different from returns in any other month. Exhibit 1 shows the frequency of monthly returns (expressed in 1% increments) for a broad-market index of US stocks from January 1926–June 2020. Each horizontal dash represents one month, and each vertical bar shows the cumulative number of months for which returns were within a given 1% range (e.g., the tallest bar shows all months in which returns were between 0% and 1%). The blue and red horizontal lines represent months during which a presidential election was held, with red meaning a Republican won the White House and blue representing the same for Democrats. This graphic illustrates that election month returns have been well dispersed throughout the range of outcomes, with no clear pattern based on which party won the presidency. 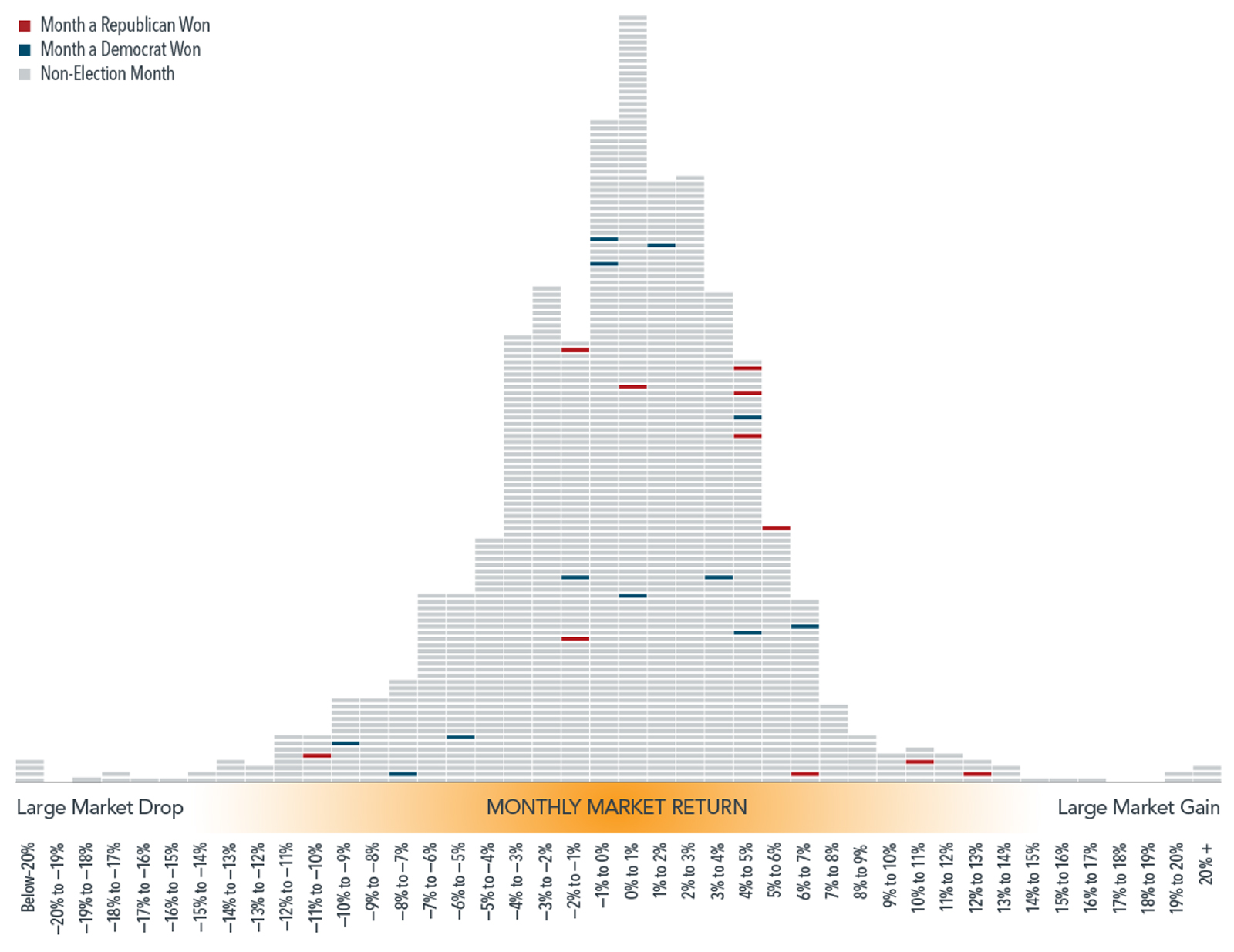 It’s natural for investors to look for a connection between who wins the White House and which way stocks will go. But shareholders are investing in companies, not a political party. And companies focus on serving their customers and helping their businesses grow, regardless of who is in the White House.

Stocks have rewarded disciplined investors over the long term, through Democratic and Republican presidencies. Making investment decisions based on the outcome of elections, or how investors think they might unfold, is unlikely to result in reliable excess returns. On the contrary, it may lead to costly mistakes. Accordingly, there is a strong case for investors to rely on a consistent approach to asset allocation — making a long-term plan and sticking to it.

This post was prepared and first distributed by Dimensional Fund Advisors.

1 The performance of active investment managers casts doubt on the ability of investors to consistently outguess market prices. For more on this topic, see Fama and French (2009), “Luck versus Skill in Mutual Fund Performance.”

This material is in relation to the US market and contains analysis specific to the US.

In US dollars. Stock returns represented by Fama/French Total US Market Research Index, provided by Ken French and available at http://mba.tuck.dartmouth.edu/pages/faculty/ken.french/data_library.html. This value-weighed US market index is constructed every month, using all issues listed on the NYSE, AMEX, or Nasdaq with available outstanding shares and valid prices for that month and the month before. Exclusions: American depositary receipts. Sources: CRSP for value-weighted US market return. Rebalancing: Monthly. Dividends: Reinvested in the paying company until the portfolio is rebalanced.

The information in this document is provided in good faith without any warranty and is intended for the recipient’s background information only. It does not constitute investment advice, recommendation, or an offer of any services or products for sale and is not intended to provide a sufficient basis on which to make an investment decision. It is the responsibility of any persons wishing to make a purchase to inform themselves of and observe all applicable laws and regulations. Unauthorized copying, reproducing, duplicating, or transmitting of this document are strictly prohibited. Dimensional accepts no responsibility for loss arising from the use of the information contained herein.

Eugene Fama and Ken French are members of the Board of Directors of the general partner of, and provide consulting services to, DFAL and DIL.

Shore Point Advisors is registered as an investment adviser with the State of New Jersey. Shore Point Advisors only transacts business in states where it is properly registered, or is excluded or exempted from registration requirements. Past performance is not indicative of future returns. All investment strategies have the potential for profit or loss. There are no assurances that an investor’s portfolio will match or outperform any particular benchmark. Content was prepared by a third-party provider. All information is based on sources deemed reliable, but no warranty or guarantee is made as to its accuracy or completeness. All expressions of opinion reflect the judgment of the authors on the date of publication and are subject to change. 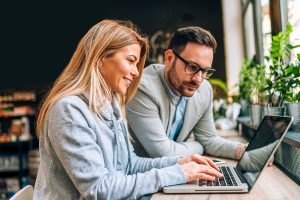 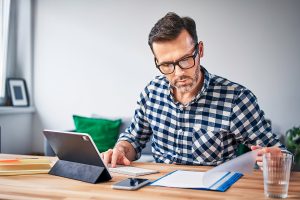 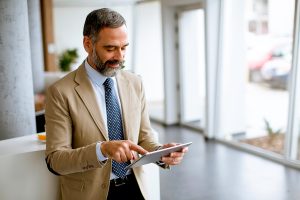 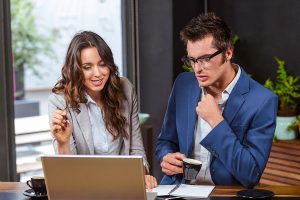